So You Married a Book

Before we jump into the sexy topic of marrying books, I want to mention one more tidbit about book club editions—and it's an exciting one. When a book's dust jacket flap is clipped at the bottom it usually means someone is trying to deceptively pass off a book club edition as the real deal. This isn't always the case, however. The bottom of the jacket sometimes really is clipped to remove the price. Because book prices usually are printed at the top of the flap, jackets that are clipped at the bottom can beguile book buyer and book seller alike.

The impecunious bibliophile should note that a lot of times a book dealer will mistake a trade edition book that is price-clipped in this manner for a book club edition and price it (that is to say, reprice it) concomitant to the lower benchmark.

So, which books might such a contingency bear upon? 1) virtually all books published by Simon and Schuster through the nineteen eighties; 2) most books published by Lippincott, Bobbs-Merrill, New Directions, and Dutton; and 3) some books published by Houghton Mifflin and Doubleday—both publishers dabbled in this heterodox habit sporadically. (Many European publishers are in the habit of pricing their books likewise but I don't intend this to be an exhaustive survey.) 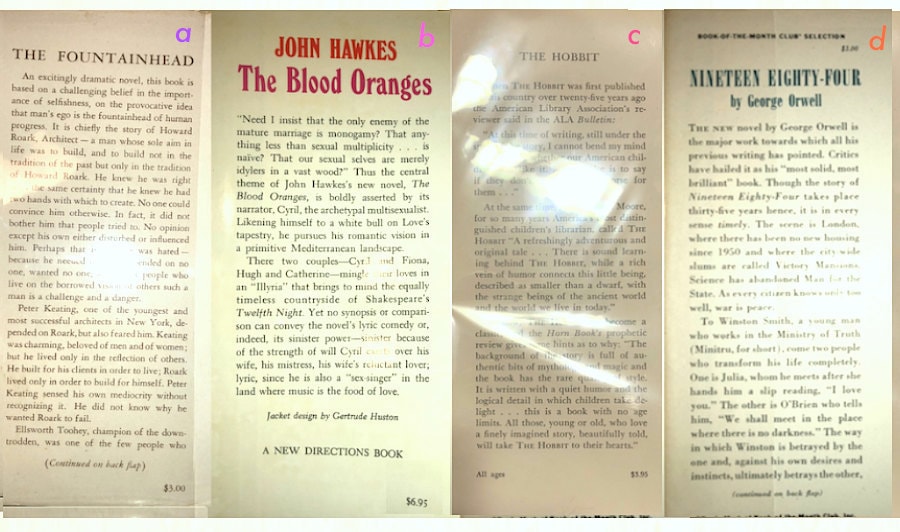 Whenever a dust jacket is removed to a book other than the one with which it was originally issued, it is said to be married to its new partner. (By "other book," I am referring to a separate physical book, not a different title—though I have been surprised, unhappily, by the latter coupling a few times as well).

Ex-library copies are usually ugly and dirty; frequently, however, their dust jackets—sheathed in Gaylord Heavy Duty no. 12 mylar—are very nice indeed. You don't have to be Alfred North Whitehead to appreciate the algebra involved here; for instance:

Preferably you'd want to marry a first edition (i.e. first printing) book to a first edition jacket. Sometimes the dust jacket of a particular book remains unchanged—that is, it is identical in every possible detail—through several printings. Usually this occurs when a book is a big-seller and passes through a number of printings in a short span of time. However, the publisher won't be able to resist slapping another positive review on the jacket if there's one on offer. If the book happens to win any award, the publisher likewise will not fail to advertise this fact with some pizazz. The price on the jacket will be higher on successive printings which appear many months or years later, the publisher's name may be different as it likely merged with another publisher or twelve in the ensuing span of time, etc. Books also generally get smaller, and the paper thinner, over the course of a book's successive printings (for instance, each of the fifty or so printings of William Shirer's Rise and Fall of the Third Reich seems to be a bit smaller than the previous).

Previous Post Some Books are Bigger than Others
Next Post What determines the value of a book?
0 items in your cart