Book Club Editions I have Known and Loved

The book club edition. You probably remember your first encounter with this indecent denizen of the book world. It wasn't pleasant, was it? Learning that your priceless first edition─the one you had considered selling so you could buy that NHL skybox─was...what? Worthless? Really?

Why, you wondered, is this sneaky breed of book imposter allowed to trick and taunt the hapless collector? Why are book club editions even a thing?

I don't really have an answer to that question. I guess some people just prefer that other people curate their entertainment for them. Like how when a song that you like comes on the radio it's more enjoyable than if you had played the same song off a CD. That's probably a bad example. Whatever the reason, they're a fact of book collecting life and with the right attitude book club editions can be more boon than bane. But what exactly is a book club edition, and how does it differ from general reprinted editions?

In the first place, a book club edition of a particular book is for a club─it is printed for and sent to each of its subscribed members, whether they want it or not. (Back in the nineteen sixties not being part of a book club was like not owning a pair of shoes. Embarrasing.)

Further, the book club edition and the corresponding trade edition of a particular book are published nearly simultaneously, with the former trailing the latter by a few weeks or so. Notably, this means book club selections are chosen speculatively, ahead of any actual sales numbers for a given title. Going on book market buzz and political savvy alone, the book clubs are occasionally guilty of dispersing literary poopoo in unjustifiably massive quantities. If you've ever gone book scouting at a thrift store or a retirement home dumpster you're probably familiar with the name Frank Yerby; why a book club would select Foxes of Harrow for a monthly main selection, instead of something more enjoyable, like, say, Selections from The Bingo Bugle, is a mystery that will likely never be solved.

There are and were many different book clubs but the vast majority of "book club editions" you will encounter in the world of used books derive from two clubs: 1) The Book of the Month Club (BOMC) and, 2) The Doubleday Book Club. It is fairly easy to distinguish the two:

The following decision tree/flow-chart will help you determine if a book is a book club edition or not. Print it out and take it with you while you're book scouting if you want to look professional. 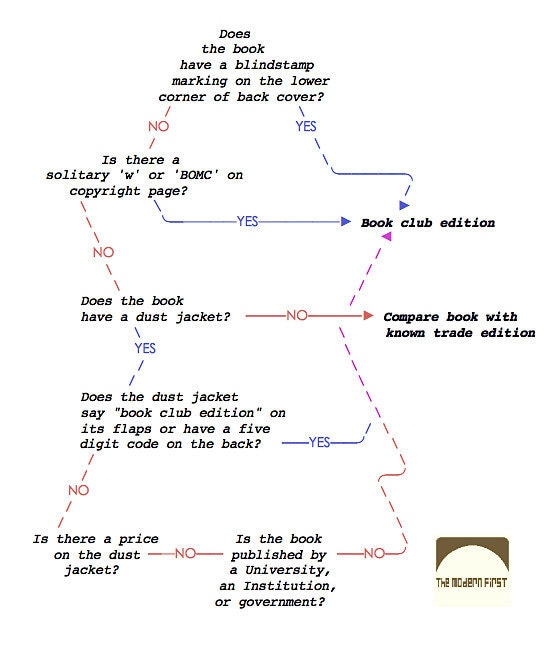 The BOMC actually merged with Doubleday Book Club in the year 2000, bringing all four living members together under a single clubhouse roof (just kidding!) But in its heyday─the 1950s through 1970s─Doubleday Book Club was the most popular club in America. In addition to the main club, there were also specialized "sectional" clubs catering to fans of various genres: the Fireside Theatre Club, Science Fiction Book Club, The Crime Club, and so forth.

Unlike book club editions, reprint editions seldom resemble their trade edition counterparts. Well-known reprint houses include The Modern Library, A. L. Burt, Everyman's Press, Castle Books, Garden City Books, Tower/World Books, and Grosset and Dunlap. The latter two are often misidentified as publishers of book club editions, most likely on account of their habit, back in the day, of opportunistically stalking and scrounging the reprint rights to any modestly successful publication. Their imitation books, which appear to have been printed on recycled fast food napkins bound in covers made of compressed dust, were rushed to press right behind the trade editions.

Snooty book collecting people are fond of claiming that book club editions are worthless, but visit their homes and take a look at their bookshelves. It's a different story. There's probably even a Foxes of Harrow book club edition in there somewhere. No dust jacket, either.

The truth is, there are lots and lots of collectible book club editions. Is anybody really going to take a pass on a book club edition of Gravity's Rainbow or One Flew Over the Cuckoo's Nest at the Friends of the Library Sale? To ask the question is to answer it.

Catcher in the Rye book club editions are fairly common but I still buy every copy I come across. The earliest book club specimens of this novel, like their trade edition counterparts, were issued in the discontinued photo-of-the-author-on-the-back dust jackets. These are not very common and are thus much more valuable. The first issue book club edition of this title is in fact more valuable than early trade editions with the later state jacket.

It is true that for some books, the book club edition and the trade edition are almost impossible to tell apart. The first book club editions of For Whom the Bell Tolls, Nineteen Eighty Four, and To Kill a Mockingbird, for instance, were issued in dust jackets with price tags printed on the flaps. Be aware that most of the books advertised online as first editions of these titles are, in fact, book club editions.

That's it for today. Be alert for further installments on the exciting issue of book club editions!

Previous Post The Plague: Booklice and Mold on Books
Next Post Some Books are Bigger than Others
0 items in your cart