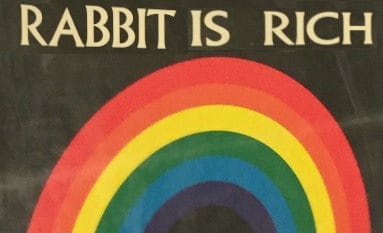 Rabbit Run, John Updike's second novel, was published in 1960. The story of Rabbit Angstrom, a hapless basketball jock adjusting to married life, earned extensive praise and elevated Updike to the first rank of American writers. His next two published novels, The Centaur (1963), and Of the Farm (1965) were acknowledged in polite terms by reviewers but ignored by the reading public.

In 1971, he turned his attention back to Rabbit Angstrom, by now in his thirties and sowing stale midwestern oats. The sequel, titled Rabbit Redux, was quite popular and well-reviewed. A third installment, Rabbit is Rich, followed in 1981, winning the pulitzer prize. Updike's narrative seemed to pick up speed once he got over Rabbit's midlife crest and began cruising downhill. This book delivered an addictive dose of fervid family drama, and a decade later I was just about dizzy with impatience for an anticipated Rabbit is Retired follow-up.

That novel will have be in the form of fan-fiction because the fourth volume, published in 1990, was instead titled, Rabbit at Rest. Our hero was going downhill quick and Updike didn't want to stick around--he still owed Knopf the hotly-anticipated Widows of Eastwick. Intrepid readers may already know that  'at Rest' is aristocratic slang for 'dead.' So that concludes the tetralogy.

There is a problem with the series that I want to talk about though, and that is Rabbit is Rich's continuity-breaking no-reason rainbow-themed anomaly of a dust jacket. As you can see, the dust jackets of each of the other three installments in the series conforms to the same handsome striped motif—as do two earlier Updike books: The Same Door and The Poorhouse Fair.

But not Rabbit is Rich. Rabbit is Rich has to have more razmatazz. Is the concept of being rich something that can be represented solely in the form of a rainbow?  I can't even bear to place the four volumes consecutively on a shelf with that officious aberration looming there indecently. Have you ever seen a car rolling by with three normal tires and then one novelty-sized spare tire? It's like that but if the car was also delivered from the factory thus configured.

Anyway, and with the  preceding commentary nonwithstanding, you will find all four books in the Rabbit series—trade editions in hardcover—available for purchase on our website.

Next Post Physical books are heavy, pretentious, and obsolete—stop buying them
0 items in your cart