Note: this is the second edition of what is planned to be a regular blog feature, recurring on a weekly  basis. Zobert will answer questions about books and book collecting. Last week's column is here.

Zobert, I have a first edition of John Steinbeck's Grapes of Wrath and I see people selling this book online for thousands of dollars, but when I took it to a local book dealer he would only offer me a hundred bucks for it. What's going on?

Now as far as I see it, throwing away a dust jacket is the second worst book-related thing you can do. The only thing worse is licking your fingers in order to gum up some disgusting saliva-based page-flipping traction while reading a book. At any rate, you'd be better off (in the strict pecuniary sense) throwing away the book and keeping the dust jacket. The inverted balance of values made evident by this fact doesn't say a lot for the book collecting community but if this bothers you just look at the clownish self-debasing money-laundering spectacle that carries on under the banner of modern art collecting, and count your blessings.

Figure 1: Incredibly, (A) and (B) are of roughly equivalent value

Unfortunately, a shadow of the modern art ethos has slipped over the book collecting world, for the economic transactions at the high-end of the business nowadays gambol strictly on the pretext of visual iconography. The elite auction houses have sustained this tendency by imposing a selectively narrow curatorship on their clientele and this has pulled the upper end of the industry into a retrogressive and self-perpetuating downward spiral.

But there's another, slightly less disagreeable, reason that dust jackets have become increasingly valuable over time and that is that the books they envelop have, more and more, become almost too ugly to be seen without them. Notice in Figure 2 (above) that the sense of beauty and craftsmanship, so abundant in the books of the nineteenth century, is about as common in the twenty-first century as an autographed picture of Thomas Pynchon. In short, today's dust jackets perform a function analogous to the Elephant Man's burlap hood. So hang on to your dust jackets. 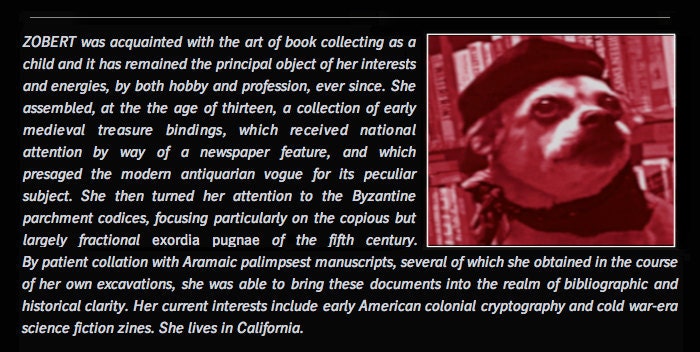 Previous Post Ask Zobert, Volume One
0 items in your cart